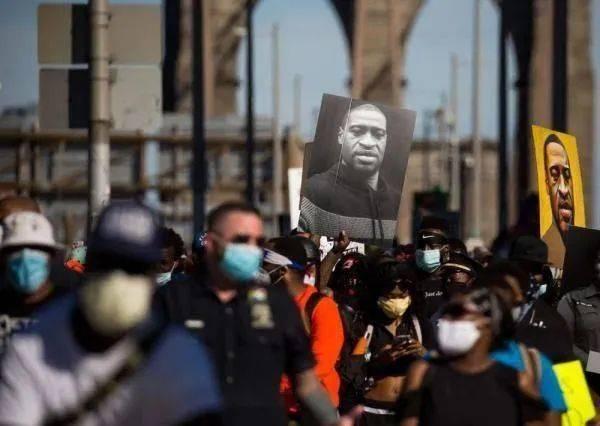 On May 25, in New York, people held a rally in memory of Freud in cardman Square Park.

Since the beginning of this year, violent law enforcement incidents against ethnic minorities by white police in the United States have occurred one after another. The old scars of racism continue to shed new blood, which makes public opinion exclaim: “the new ‘Freud case’ is still on!”

“A deep and escalating crisis”

“I can’t breathe!” On May 25, 2020, Freud, an African American man, was knelt down and killed by white police in Minnesota. This painful groan immediately spread all over the world. Since then, a wave of protests against racial discrimination swept across the United States and broke out in many countries in Europe and the United States.

A year later, can the “Freudians” breathe freely? The answer is disappointing. “This year, about three people died in the process of police law enforcement every day. From January to April, the police had no record of killing for only six days. In the 21 days of Freud trial alone, 64 people in the United States were shot and killed by the police, most of them people of color,” said an article in a recent issue of politico, a US political news website “Since June 2020, the police have killed at almost the same rate as in the past five years,” Time magazine ironically pointed out

“This is a long year, this is a painful year.” The sad words of Freud’s family are undoubtedly a true portrayal of the hard struggle of American Minorities under the haze of racism.

In an interview with our reporter, Li Qingsi, a researcher at the National Institute of development and strategy of Renmin University of China and deputy director of the American Research Center, analyzed that the “Freudian” tragedy is constantly staged in the United States. The deep-seated reason is that the racist tradition of “white supremacy” in the United States is deeply rooted and will not be changed by temporary protests and demonstrations. Novel coronavirus pneumonia has severely damaged the economic and social development of the United States, and the life of the lower public has been one disaster after another. This further intensified the racial conflicts and aggravated the social rip.

In the face of increasingly fierce racial contradictions, the US authorities have to make a gesture to solve the problem. In March this year, the US House of Representatives passed the police reform bill named after Freud in an attempt to prohibit controversial law enforcement means such as throat locking and reduce the difficulty of prosecuting illegal police acts.

According to CNN, the White House hopes to pass the police reform bill within the first anniversary of Freud’s death, but the bill is still a dead letter due to frequent obstruction by the Senate. Some analysts said that even if the bill is passed, its binding force on law enforcers is still limited, because all parts of the United States have their own policies and law enforcement processes.

A succession of chilling facts. According to the data from the New York Times, the support rate of the “black life is life” movement has shown a downward trend since reaching its peak in the summer of 2020. After a short-term surge, the Republican Party’s support for the black civil rights movement has rapidly fallen back to its previous level. At the same time, many states in the southern United States have adopted or are in the process of adopting legislative procedures to substantially restrict the voting rights of ethnic minorities, further violating the political and democratic rights of ethnic minorities. In addition, Florida, Oklahoma and other states have passed new laws aimed at suppressing racial discrimination protests.

Morris Mitchell, an American black activist, describes the cycle of police killing people of color: “public atrocities, mass protests, and then the government response.” In his view, government officials prefer to focus on phenomena and processes rather than root causes and results.

On April 20, Xiao Wan, a white policeman who killed Freud, was convicted of three counts. American politics trumpeted that this was a “historic moment of great significance”. CNN political commentator Cole Brown lamented: “the real justice is that Freud should have lived.” “Some ‘political actors’ are trying to give people false hope, and Freud’s death gives them a chance to show,” said a person in charge of the American civil rights organization “change color”

“On the whole, the various actions of the US government trying to solve the problem are still ‘head to head, foot to foot’, which is difficult to play a fundamental role.” Li Qingsi pointed out that if the soil of racial discrimination is not eradicated, the political and economic roots of social inequality remain unchanged, and the racial contradictions in the United States will not be fundamentally alleviated. “Some politicians’ high-profile commemoration of Freud is essentially to win the support of voters and realize their political demands.”

Recently, verra Fletcher, a 107 year old American, has attracted widespread attention. At a hearing in the US House of Representatives, as one of the survivors of the “Tulsa Massacre” 100 years ago, she asked to prosecute the city of Tulsa and the perpetrators of the massacre and seek compensation for the incident.

On May 31, 1921, thousands of white mobs besieged the African American community in Tulsa, Oklahoma, killing hundreds of African Americans and wounding thousands. “Tulsa Massacre” is known as “the most serious genocide in American history”. After a hundred years, the tragedy caused by racial discrimination attracted the attention of the mainstream society in the United States.

Looking back on the history of ethnic minority resistance in the United States, people are full of hope and disappointment again and again. The deep-rooted white supremacy, the long-term connivance of the judicial system and the inaction of politicians even make a show, making the goal of racial equality desired by the American people out of reach. As a US congressman said, systematic racism has been breeding in American soil for more than 400 years, and the United States “still has a long way to go”.

According to the latest data from the associated press and the public affairs research center of the National Opinion Survey Center, 60% of Americans believe that racism is a “very or extremely serious” problem. According to the non-profit organization “stop hatred of Asian Americans”, more than 6600 anti Asian hatred incidents have been recorded in the United States since the outbreak.

The United States has long been recognized for its human rights abuses in the areas of racial discrimination and hate crimes. Even American leaders have admitted this year that hatred and racial discrimination are the “ugly poison” that plagues American society. In this regard, Li Qingsi pointed out that the harm brought by racism to American society is comprehensive. The ethnic minorities at the bottom are arbitrarily infringed, and even the basic right to life can not be guaranteed. This is not the due state of modern civilized society and society ruled by law. The intensification of racial antagonism and social contradictions will cause people’s psychological panic, and the new immigrants and ethnic minorities will further lack their sense of identity and belonging to the country, thus endangering social stability. Under the epidemic, the overall goal of the US government to revive the economy will also be seriously impacted. (our reporter Li Jiabao)

Racism in the US workplace towards minorities