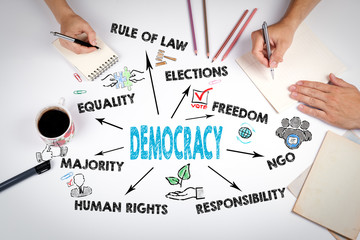 The word “democracy” is derived from the Greek word “demos,” which means “people.” The people have sovereign power over legislators and governments in democracies. Although there are differences across the numerous democracies around the world, some concepts and behaviors set democratic government apart from other types of administration.

Democracy is a form of governance in which all citizens, directly or through freely chosen representatives, exercise authority and civic responsibility. Democracy is the institutionalization of human freedom; it is a collection of principles and activities that defend human liberty.

The ideas of majority rule, as well as individual and minority rights, underpin democracy. While honoring the majority’s will, all democracies zealously preserve the fundamental rights of individuals and minority groups. Democracies protect citizens from all-powerful central governments by decentralizing government to regional and local levels, recognizing that local government must be as open and responsive to citizens as feasible.

Democracies recognize that one of their primary responsibilities is to safeguard fundamental human rights such as freedom of expression and religion, the right to equal protection under the law, and the ability to organize and participate fully in society’s political, economic, and cultural life.

Regular, free, and fair elections are held in democracies, and they are open to all citizens. In a democracy, elections must be genuine competitions for the support of the people, not masks for tyrants or a single political party.

Democracy holds governments accountable to the rule of law, ensuring that all individuals are treated equally under the law and that their rights are protected by the legal system.

On the surface, majority rule and the protection of individual and minority rights appear to be incompatible. These values, on the other hand, are twin pillars that support the very base of what we mean by the democratic government.

Majority rule is a tool for organizing government and deciding public issues, not a path to despotism. No majority, even in a democracy, should take away the basic rights and liberties of a minority group or individual, just as no self-appointed organization has the right to persecute others.

Minorities, whether as a result of ethnicity, religious belief, geographic location, income level, or simply as losers in elections or political discussion, are granted basic human rights that no government, and no majority, can deny them.

Democracies recognize that one of their most important responsibilities is to defend minorities’ rights to maintain cultural identity, social traditions, individual consciences, and religious activities.

Acceptance of ethnic and cultural groups that appear unusual, if not alien to the majority, might be one of the most difficult tasks any democratic government faces. Democracies, on the other hand, acknowledge that variety can be of huge value. They view differences in identity, culture, and values as a challenge that can strengthen and enhance them rather than as a danger.

There is no single answer to how minority-group differences in beliefs and values are resolved — only the certainty that only via a democratic process of tolerance, debate, and readiness to compromise can free societies to reach agreements that incorporate all people.

War and peace are the most important issues that any country can confront, and many countries look to their military for leadership in times of crisis.

Peace and conflict, as well as other dangers to national security, are the most pressing concerns confronting democracies and must be determined by the people, through their elected representatives. A democratic military serves rather than leads its country. Military leaders advise and carry out the choices of elected officials. Only those who have been elected by the people have the power and obligation to decide a country’s fate.

As a result, the concept of civilian control and power over the military is essential to democracy.

Civilians must direct their actions.

A democratic people must work together to form the government of their choosing to safeguard and protect individual rights and freedoms. Political parties are the most common means of achieving this goal.

Political parties are non-profit organizations that serve as a conduit between citizens and government. Parties recruit candidates and advocate for their election to public office, as well as motivate citizens to participate in the election of government leaders.

The majority party (or the party that was elected to hold government positions) aims to pass a variety of policies and initiatives into law. Opposition parties are entitled to criticize the majority party’s policy suggestions while also making their own.

Citizens can hold elected party representatives responsible for their activities through political parties.